ATHENS — If ignominy were tax revenue, Greece might be a big step closer to ending its budget problems.

Politicians, business executives and bankers are being raked through the headlines or incarcerated in a white-collar crackdown as the Greek government goes after people suspected of tax dodging. Those under questioning include the former finance minister George Papaconstantinou, in a highly charged parliamentary investigation into his handling of a list of Greeks with foreign bank accounts.

“Why do you think they are catching all these people?” Mr. Papaconstantinou said in a recent interview, in the suffer-no-fools manner that defined his two years as finance minister until the current government took power last June. “Because we changed the laws to allow the government to do this.”

But those changed laws, and the populist pursuit of supposed deadbeat fat cats, have yielded little in additional tax revenue.

Tax evasion lies at the heart of the Greek financial collapse, which has resulted in international bailout loans exceeding 205 billion euros, or $266 billion, the size of Greece’s depressed economy. In fact, Greece’s international creditors have made revamping its notoriously lax tax system a primary condition for any additional bailout financing.

But even after an overhaul of Greece’s tax collection apparatus — and a politically charged campaign to pursue delinquents — government officials have collected only a tiny fraction of what is owed and potentially collectible.

Rather than capture a lot of extra money, the crusade seems mainly to have captured prominent quarry. The net cast by newly empowered prosecutors has snared the former mayor of Salonika, the leader of the Greek national statistical agency and several former cabinet members.

Lawyers and tax officials estimate that hundreds of people have been locked up in the last year, suspected of tax evasion. Under the new laws, someone who owes the government more than 10,000 euros in taxes can be arrested on the spot and given the choice between paying up or being put behind bars. While held, the suspect can wait as long as 18 months before the prosecutor decides on a formal charge.

Despite those efforts, of the estimated 13 billion euros that government officials say is owed by Greece’s 1,500 biggest tax debtors, only about 19 million euros has been collected in the last two and a half years.

Among the few to benefit from the crackdown have been criminal defense lawyers specializing in tax law. Among them is Michalis A. Dimitrakopoulos, who represents many of the top political and business figures under government investigation or behind bars. His clients include the daughter and the former wife of Akis Tsohatzopoulos, a former defense minister and Pasok party official, all of whom are on trial on charges of money laundering and taking kickbacks.

Mr. Dimitrakopoulos, who proudly shows visitors to his office a wall covered with framed clippings of his courtroom exploits, says business has never been better. But he also says he has clients with many billions of euros overseas who will never bring their money back to Greece as long as — as he contends — killers have better legal rights than tax offenders. 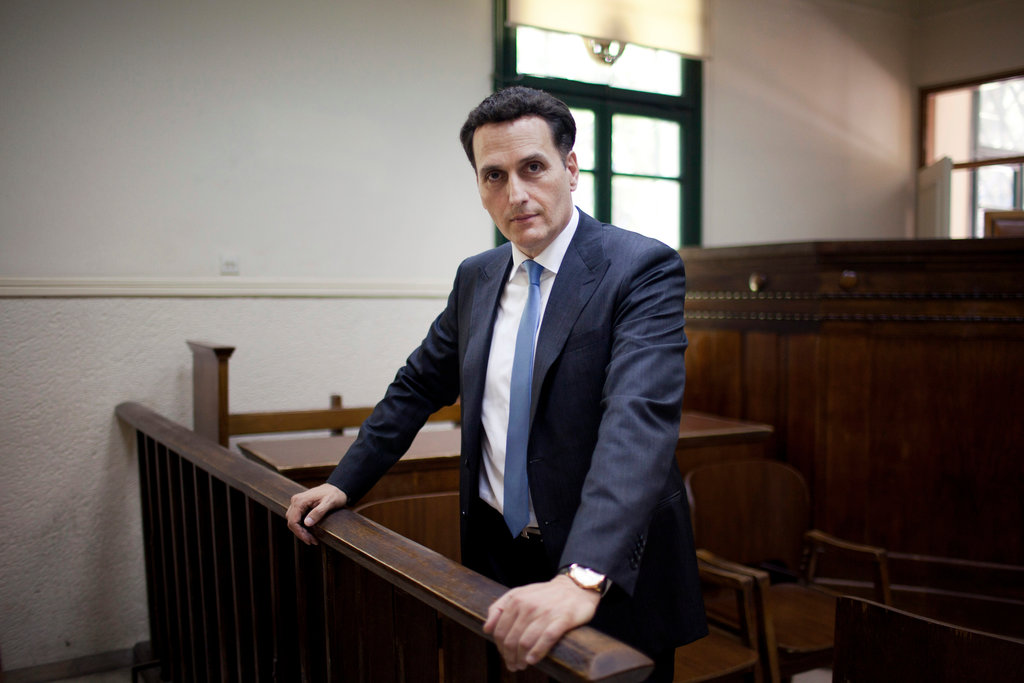 The lawyer Michalis A. Dimitrakopoulos represents many of the top figures under investigation.Credit…Eirini Vourloumis for The New York Times

By any measure, that is hyperbole.

Legal specialists note, for example, that Mr. Papaconstantinou, the former finance minister, is awaiting the outcome of the parliamentary inquiry in his case from the comfort of his suburban Athens home. They say it is unlikely he will ever serve time.

Mr. Papaconstantinou declined to discuss the allegations against him: that he doctored the so-called Lagarde list, named for Christine Lagarde. Ms. Lagarde, now managing director of the International Monetary Fund, was the French finance minister in 2010 when she gave Mr. Papaconstantinou a computer disk containing the names of Greeks who had Swiss accounts with HSBC Bank. The file had been stolen by a French former employee of the bank and ended up in the hands of France’s government.

Mr. Papaconstantinou’s accusers contend that he deleted the names of three of his relatives and did not pursue the matter while he was in government. He has vigorously disputed those accusations and has not been accused of any financial gains from the affair.

If Greece’s 1,500 biggest tax debtors paid, the government would easily wipe out its budget deficit for 2013. Analysts estimate that the taxes avoided by Greeks of all income levels total 55 billion euros, which would help Greece return to firmer financial footing.

“I am afraid it will take several generations to change the mentality here that it is better to not pay your taxes,” said George Samothrakis, an Athens-based accountant who specialized in Greek tax law. “But because that mentality can’t be changed right now, the government is doing whatever it can to increase collection. This is our last chance to get it right.”

To that end, the government has created a powerful and autonomous office, modeled on the American Internal Revenue Service, that audits and enforces all aspects of the tax system.

One challenge to generating a large return from these efforts is the Greek recession, which economists predict will extend into next year. Not as much personal or corporate income is available to tax as there would be if the economy were vibrant.

That is why Kostas Karagounis, a deputy justice minister, is exploring novel ways to keep tax offenders and other white-collar criminals from further crowding Greek cells. Mr. Karagounis, who has seen his prison budget cut 50 percent, is proposing that some tax offenders be put under house arrest, or — more controversially — be allowed to pledge their property to the Greek government to avoid conviction.

“We have to punish the people who made this mess,” Mr. Karagounis. “But I want them to pay what they owe, more than I want to put them in jail.”

Sometimes the money chase can seem an overreach — like the demand recently imposed on a retired banker in his late 60s that he personally pay a fine of 6.35 billion euros to the state, as a result of his company’s failing in a financial scandal more than six years ago.

At least he has so far avoided jail time, which is more than many of the accused can say. Greece’s most notorious prison, Korydallos, which houses Albanian contract killers and members of the Greek terrorist group 17 November, among other hardened criminals, now also holds a growing number of fallen figures from the elite strata of Greek society.

One person there who says he would gladly pay his way to freedom is Lakis Gavalas, a flamboyant fashion entrepreneur accused of owing the government more than 10 million euros in value-added taxes. Mr. Gavalas has been in Korydallos for about 12 months now, even though he has promised to pay his tax debts by selling some of his real estate assets.

Other big names at Korydallos include Akis Tsohatzopoulos, a former defense minister and Pasok party grandee charged with money laundering and taking kickbacks.

Two other of the better-known figures accused of tax violations — Andreas Kouris, who controls one of Greece’s most widely read Sunday newspapers, and Lavrentis Lavrentiadis, the chief executive of the failed Proton Bank — have even been Mr. Gavalas’s cell mates.

“I really don’t understand why I am in jail,” said Mr. Gavalas in an interview by phone from prison, where he says he passes the time by combing the prison’s old clothes bin for vintage fashion items. “I owe money, I did not steal money — why don’t they just take my properties and leave me in peace.”

A version of this article appears in print on May 13, 2013, Section B, Page 2 of the New York edition with the headline: Greek Crackdown on Tax Evasion Yields Little Revenue in Tackling the Deficit.