MEPs vote to remove role from Eva Kaili, one of four charged in corruption and bribery investigation

The European Parliament has voted to strip a Greek MEP implicated in a bribery and corruption scandal of her role as one of the body’s vice-presidents.

MEPs voted by 625 votes to one, with two abstentions, to remove Eva Kaili as one of the parliament’s 14 vice-presidents, following a decision in favour of the move by the assembly’s senior leaders.

“The group chairs in the European parliament unanimously voted for the removal of vice-president Kaili” tweeted the German MEP Terry Reintke, co-president of the Green group, before the vote. “We also agreed to a full inquiry into the matter and taking further preventative measures.”

The European parliament has been rocked by the biggest scandal in its history after Belgian prosecutors announced they had charged four people with corruption, money laundering and participation in a criminal organisation, as part of an investigation into attempts by a Gulf state, named by Belgian media as Qatar, to buy influence in the assembly.

Since Friday, police have raided European parliament offices and 19 private homes, finding data and hundreds of thousands of euros in cash. 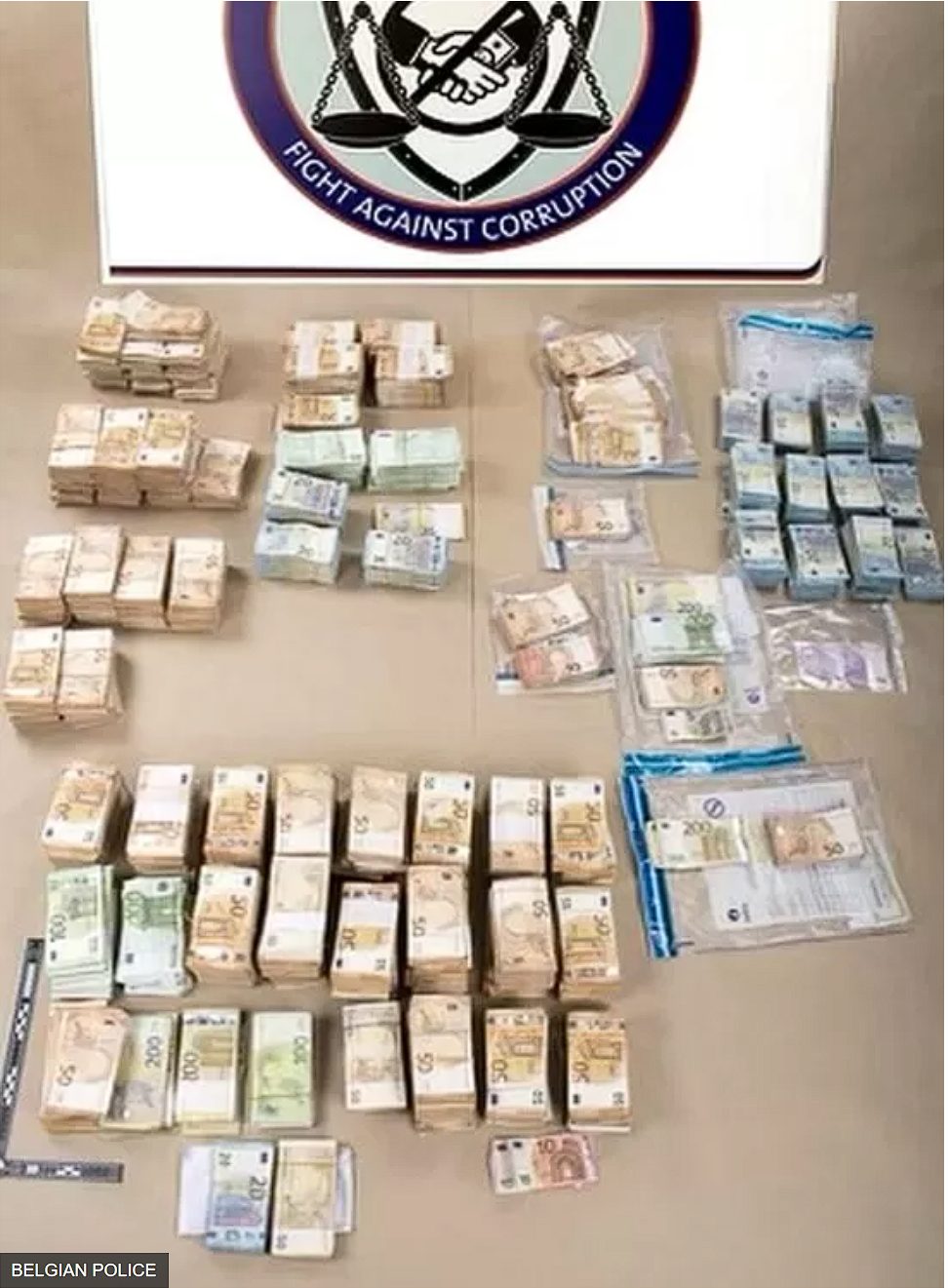 A Belgian police photo showing €1.5m in cash found in Brussels as part of the investigation into suspected bribery at the European parliament. Photograph: EPA

Kaili is one of four people charged, although she has not been officially named. She has been remanded in custody and will be brought before a judge on Wednesday.

Breaking Kaili’s silence on Tuesday, her lawyer said she was innocent. “Her position is she is innocent. She has nothing to do with Qatar’s bribes,” her lawyer, Michalis Dimitrakopoulos, told the Greek television channel Open TV.

Police seized computers, mobile phones and €600,000 (£515,000) in cash at one home, as well as €150,000 in a flat belonging to an MEP and “several hundred thousand euros” from a Brussels hotel room, according to the public prosecutor.

Asked if any cash was found at Kaili’s home, Dimitrakopoulos said: “I am not confirming or denying. There is confidentiality. I have no idea if money was found or how much was found.”

Kaili has been expelled from the European parliament’s Socialists and Democrats group and Greece’s Pasok party, and Greek authorities have frozen her assets.

An MEP from Cyprus’s governing Disy party has claimed that Kaili approached him to amend a highly critical European parliamentary report on LGBTQ and other human rights in Qatar.

“This can happen among colleagues,” Loucas Fourlas told Sigma TV. “But when I saw the amendments concerned Qatar I got a flea in my ear and called the general director at the foreign ministry and told him as Cyprus we shouldn’t get involved. The amendment said Qatar wasn’t so strict on human rights and homosexuality […] things that would have watered down the report.”

MEPs have postponed a vote on granting Qatari citizens visa-free travel rights to the EU, which was scheduled to have taken place this week. ​​

“We must ensure that this process has not been influenced by corruption,” said the German Green MEP Erik Marquardt, who is in charge of the file, which also affects Kuwait, Oman and Ecuador.

“We also have to make sure that any attempt to attack our democracy has consequences. For now, we will not proceed towards visa liberalisation for Qatar.”

Separately, the Spanish liberal MEP José Ramón Bauzá announced he was suspending the EU-Qatar friendship group. Such friendship groups have no official status and, according to the European parliament’s website, are “sometimes sponsored by lobbyists and foreign governments”.

Qatar has denied any wrongdoing.

EU leaders are expected to discuss the scandal when they meet the European parliament president, Roberta Metsola, on Thursday at a regular summit in Brussels. The president of the EU executive, Ursula von der Leyen, has said the allegations were of “utmost concern” and promised to act on a 2019 promise to set up an independent ethics body for all EU institutions.

The Guardian also understands that at least four MEPs from the Socialists and Democrats group employing parliamentary assistants who are subject to the Belgian police investigation have stood down from roles in the parliament while the inquiry is ongoing, at the request of the group.

The anti-corruption NGO Transparency International said the affair appeared to be “a bribery and corruption scandal of epic proportions” that demanded “root and branch reform of the EU institutions’ ethics and integrity systems”.